Ontario Provincial Police cruisers watched from a distance Friday morning as a backhoe dug up a road in Caledonia, Ont., by the entrance to a First Nations land reclamation camp that has put a halt to a planned housing development.

Ontario Provincial Police cruisers watched from a distance Friday morning as a backhoe dug up a road in Caledonia, Ont., by the entrance to a First Nations land reclamation camp that has put a halt to a planned housing development.

Members of Six Nations of the Grand River set up camp at the McKenzie Meadows housing development in July and renamed it 1492 Land Back Lane. It’s now the centre of a land dispute that’s over 200 years old.

Six Nations of the Grand River, a Haudenosaunee community that has the largest on-reserve population in the country, neighbours Caledonia, which is about 22 kilometres south of Hamilton.

A skirmish between some members of Six Nations and the OPP on Thursday afternoon by the back entrance to 1492 Land Back Lane led camp members to move to establish control over road and highway access points to the two site entrances. The back entrance to the camp links onto Argyle Street before connecting with Highway 6.

McKenzie Road, which runs by the front entrance to the site, was dug up overnight on two sides.

By Friday morning, on one side of Argyle Street, which runs by the back entrance to 1492 Land Back Lane, a crushed school bus lay on its side with the spray painted words, “Land Back Tours.”

Nearby, a hydro pole leaned precariously, its base chewed up by fire. Up the road on Argyle Street, a transformer station sat with its gates mangled. 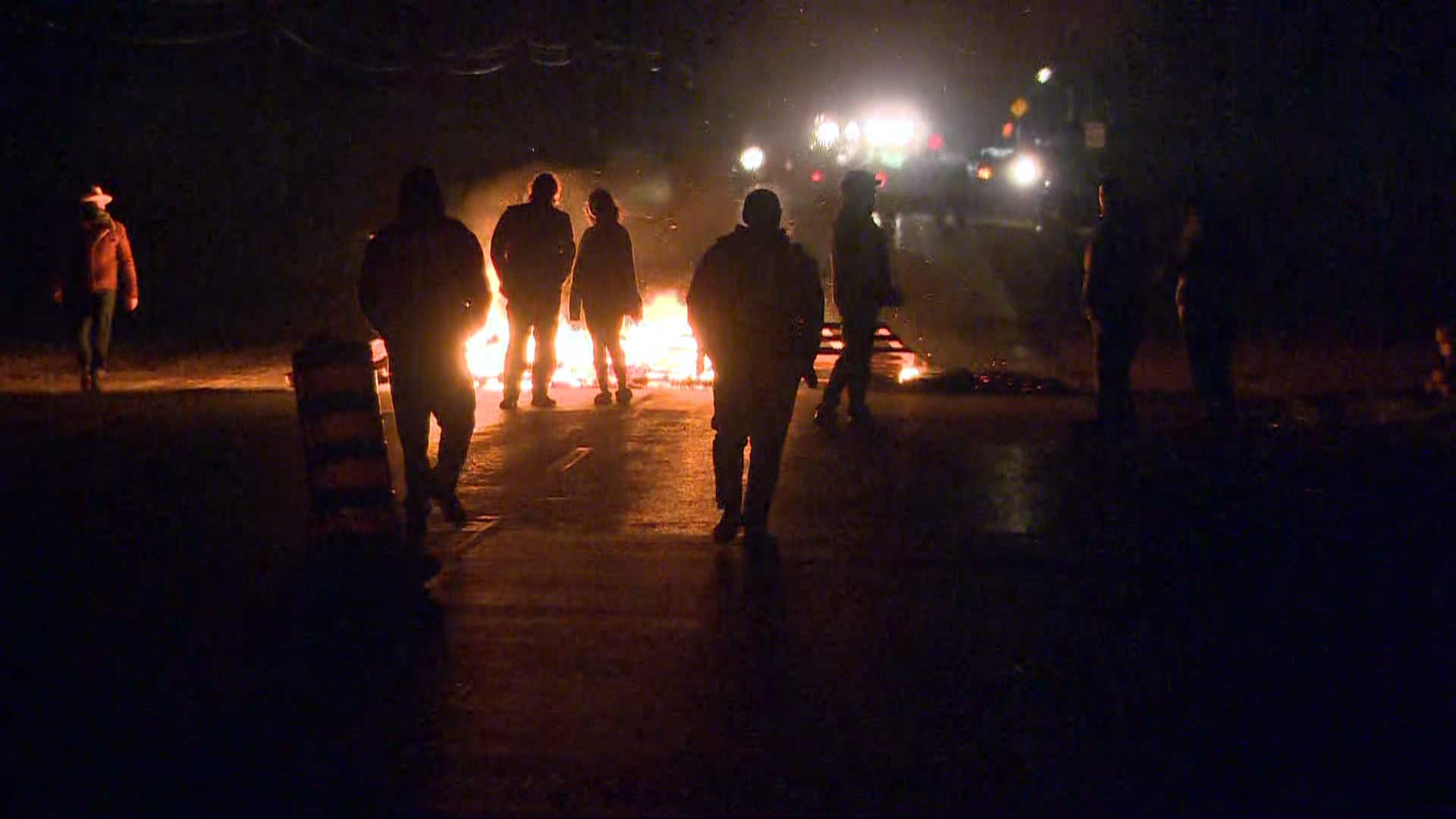 Blazing wooden pallets and tires blocked one side of a street leading into Caledonia, Ont., after a skirmish between police and members of a First Nation over a land reclamation camp. The confrontation came hours after a judge granted a permanent injunction against the camp’s presence. 3:24

Part of Highway 6 that connects to Argyle Street was also torn up overnight by heavy machinery that members of Six Nations said they commandeered from a road work site. Another part of the highway was blocked by dirt and concrete barriers. A set of CN railway tracks was also dug up, the warning lights knocked across the rails.

On Thursday, Superior Court Justice R.J. Harper granted a permanent injunction against the 1492 Land Back Lane camp that had been requested by the developer, Foxgate Development. Haldimand County was also granted an injunction against road blockades.

Six Nations members then confronted several OPP cruisers that were parked near the back entrance of 1492 Land Back Lane. Camp spokesperson Skyler Williams said the OPP used a Taser and fired rubber bullets.

The OPP issued a statement on Twitter saying that its officers were confronted and police cruisers were heavily damaged in the confrontation and that in response, officers used “appropriate non-lethal force.”

The property is part of the Haldimand Tract granted to Six Nations of the Grand River in 1784 for allying with the British during the American Revolution.

The granted land encompassed 10 kilometres on both sides of the 280-kilometre Grand River, which runs through southern Ontario and into Lake Erie. Six Nations now has less than five per cent of its original lands.

Crown-Indigenous Relations Minister Carolyn Bennett’s office said in an emailed statement that it wants to meet with the community “at the earliest opportunity.”

The statement said “Canada deeply values its relationship with Six Nations” and wants to work “collaboratively” to deal with the “historical claims and land right issues.”