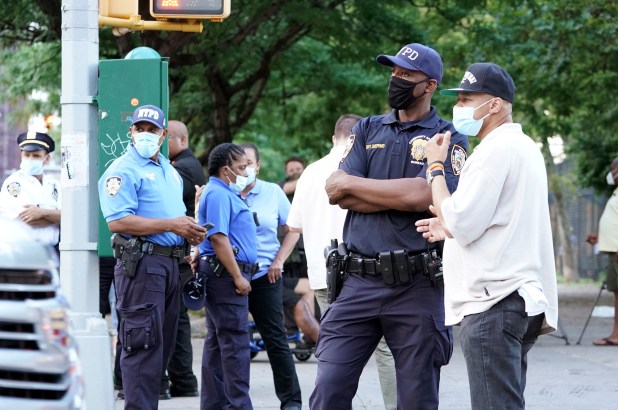 NYPD cops on patrol on the corner of Lenox Avenue and West 143rd Street in the Harlem section of New York.

Cops who ignore the state mask mandate will now face unspecified “disciplinary action,” according to a memo sent out to all NYPD officers on Friday.

The stern warning follows pressure from the public and lawmakers and months of city officials downplaying the issue.

In an administrative bulletin issued Friday morning, all members of the NYPD were told, “They are required to wear face coverings at all times when performing duties in public areas and Department facilities and whenever social distancing is not possible.”

The only time officers should not wear a face covering is when they are eating or drinking.

“Failure to comply with the above listed guidelines, or other appropriate posted signage, will result in disciplinary action,” the memo reads, adding that supervisors will be monitoring officer compliance.

If an officer believes he or she can’t wear a mask, they must  contact the NYPD’s Equal Employment Opportunity Division.

The memo, obtained by The Post from a government source, did not come from Police Commissioner Dermot Shea but from the NYPD’s Personnel and Human Resources Division.

It was issued hours after President Trump and the First Lady announced they had tested positive for COVID-19, but sources say it was unrelated.

The direction comes after months of complaints from the public about cops not following the governor’s executive order mandating face coverings when social distancing is not possible.

And it comes days after state Sen. Brad Holyman and Gov. Andrew Cuomo called out the police force for setting a bad example.

Since the start of the pandemic, Mayor Bill de Blasio and Shea have repeatedly shrugged off the issue — despite residents, makers and members of the press raising concerns.

Even the highest-ranking uniformed officer, Chief of Patrol Terance Monahan, has been spotted without a mask and shaking hands or standing with protesters.

Numerous maskless cops have also been seen by Post reporters inside the Police Headquarters gathering in close quarters.

De Blasio said on Wednesday there should be penalties for cops flouting the guidelines but he also made light of the concerns claiming the “vast majority are in fact wearing masks.”

An NYPD spokesperson declined to elaborate on the threatened “disciplinary action” Friday night.

A spokeswoman said Thursday when asked about how many officers have been fined or disciplined for not wearing face-coverings, “We take the responsibility to wear masks extremely seriously.”

If you still haven’t gotten a stimulus check, remember an Oct. 15 deadline is coming up

Lorenzo’s Locks: The 3 best bets you should consider for NFL Week 10

Voting by Mail Dates Back to America’s Earliest Years. Here’s How It’s Changed Over the Years